Always a mighty warrior with a fearsome reputation, Alistar seeks revenge for the death of his clan at the hands of the Noxian empire. Though he was enslaved and forced into the life of a gladiator, his Unbreakable Will unbreakable will was what kept him from truly becoming a beast. Now, free of the chains of his former masters,he fights in the name of the downtrodden and the disadvantaged, his rage as much a weapon as his horns, hooves and fists.

As the mightiest warrior to ever emerge from the Minotaur tribes of the Great Barrier, Alistar defended his tribe from Valoran's many dangers; that is, until the coming of the Noxian army. Alistar was lured from his village by the machinations of Keiran Darkwill, General Boram Darkwill's youngest son and commander of the Noxian expeditionary force. When Alistar returned, he found his village burning and his family slain. Bellowing with rage, he charged an entire regiment of Noxus' elite, slaughtering them by the hundreds. Only the intervention of some of Noxus' most skilled blood mages checked Alistar's rage. Brought in chains to Noxus, Alistar spent the intervening years as a gladiator in the Fleshing, pitted in endless battle for the entertainment of Noxus' wealthy leaders. Alistar's once noble soul slowly became twisted, and he would have been driven to insanity if not for Ayelia, a young servant girl who befriended him and eventually arranged for his escape. Suddenly free and with no home to return to, Alistar fled, hoping to one day exact his final vengeance upon Noxus and find the girl who had renewed his hope. He did not slink off into the shadows, however, instead becoming a vocal advocate for those whom the Noxian government treads upon. He also calls to light things that the Noxian military would prefer remain hidden – something that has made him very unpopular with Noxus' nobles. His charitable work has earned him several philanthropic awards, which serve as an interesting contrast to the rage and destruction he is known for in battle. 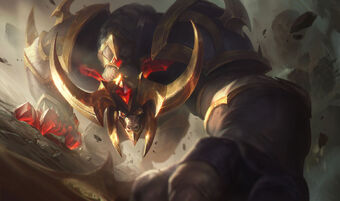 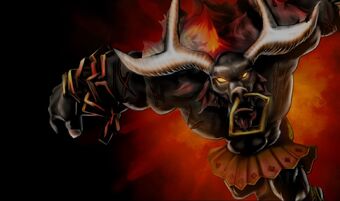